With most of these shows consisting of a twelve episode run time, we’re already at the midpoint in this season! Probably down to this weekly roundup system, but it doesn’t even feel like we’re halfway through the season at all for me. Yet here we are, although not every series is paced very well for this milestone to feel meaningful, there was a slight shift in narrative progression this week. For the most part, the storyline within each respective show has been set up for a while now and it’s here that we finally get to see some true progression. Although at the cost of some episode’s pacing grinding to a halt, to call this a weak roundup wouldn’t be exactly fair. A couple shows in mind as I write this, Week Six definitely showcased what a series can do after the amount of character development accomplished in their first half. 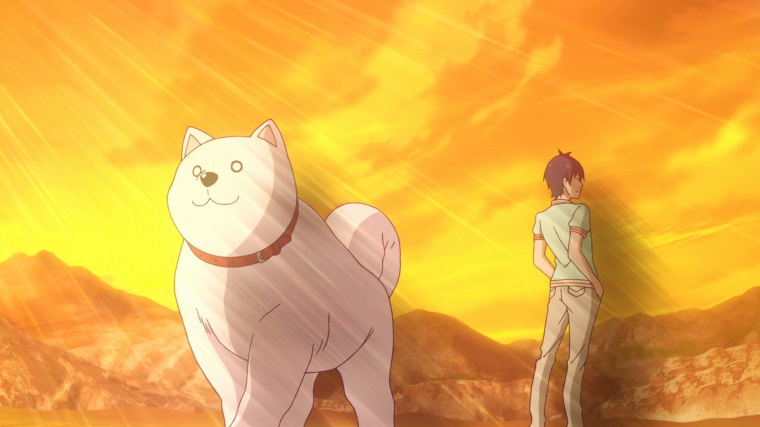 After the lengthy setup provided last week, we’re finally at the beach where hilarity can ensue. As always, divided into multiple mini stories, the beach portion is clearly what had the most effort put into it. This week took quite a lewd turn to my surprise, with the bog standard beach anime moments whizzing by, these character swiftly took to more imaginative games. This was another difficult week for determining a single header image as these beach moments were incredibly hilarious, burying the student council president in the sand and allowing Yoshiko to add some artistic liberties to her figure. Sectioning up the moments at the beach were a collection of “mom segments” that have become my personal highlight of the series. Yoshiko’s mom manages to pull off a perfect level of manic speech performance and collected dialogue patterns. Where some of the younger characters veer off into the bank of insanity beyond comprehension, there is some level of comprehension Yoshiko’s mom seems to uphold. That and the dog finally got some screen time. All in all, unlike some of the episodes in previous weeks, each section held its own – despite the beach section clearly taking the majority of the attention. 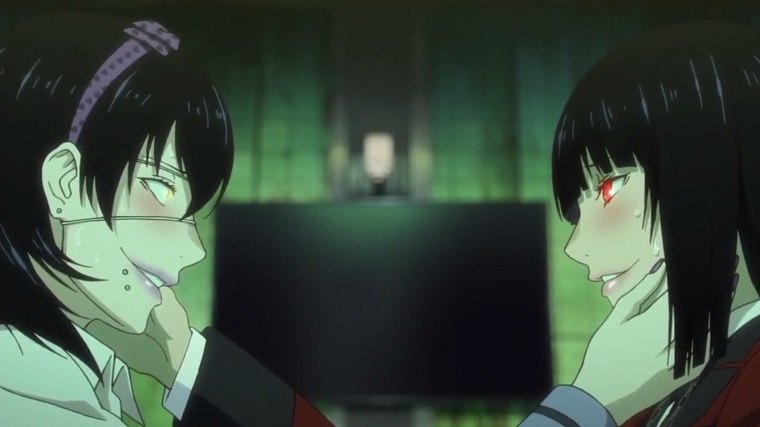 After what I consider to be a slight dip for the past few weeks, Kakegurui is back and better than ever – finally striking an enjoyable balance of “messed up stuff” and an actually engaging show. So revolver girl is definitely getting her time to shine without having to spend all of her lines in a restroom this time. As far as character development goes, it’s about as standard as we expect. With little to no reasoning other than “that’s their thing”, each of the student council members are as cardboard as the first episode. Personally, although I know it’s not the allure of a show like this, an ounce of exposition or elaboration on such eccentric character traits wouldn’t go amiss, but I digress. This episode fit in a surprising amount of setup for the parallel narratives of Yumeko and Mary in between the literal life-or-death gamble. Earlier in the season I mentioned how an academy based solely on monetary value can harbour individuals with such little care for their own bank balance. Clearly this is it, with Midari constantly on the verge of moving the show’s rating from an R- to an R+ at the mere mention of gambling. Finally, unlike some of the previous episodes, this week’s game was actually really interesting to watch. I’m seeing a lot of criticism where Kakegurui is acting as a Thriller but if it always works (which admittedly is where the issue is) then I’m all for it. With a strong cliffhanger as usual and a game unlike any we’ve seen in the series so far, I’m actually excited for the next episode. 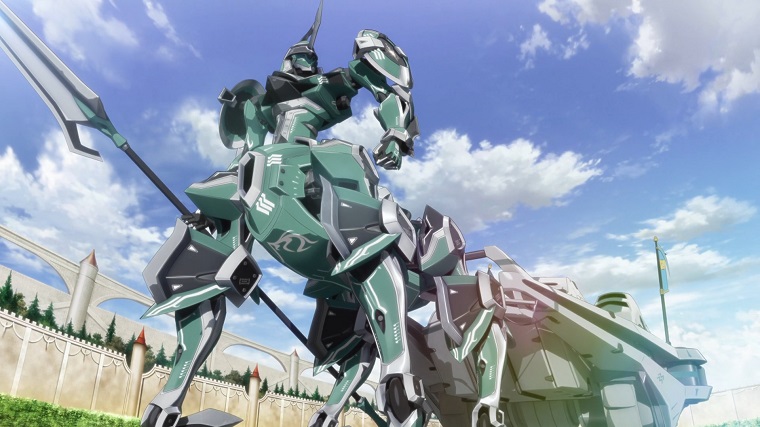 If not for the final few minutes of this episode that show off the new mech design that has been the focus of the episode, this would’ve been a relatively average one. I’ve mentioned prior how the narrator personally ticks me off and the show’s clunky writing is becoming more apparent and distracting by the week. That being said, this episode was clearly going to be a slow one from the hectic action we saw last week and the lull in the universe’s narrative. It’s obvious that this whole episode worked as setup for the big arena battle next week but that doesn’t make it any less forgiving. For a show that essentially functions as series of action sequences to keep viewers excited, an episode lacking that feature isn’t going to be very strong. Even the scenes we were introduced to were visually dull, opting for 90% of the camera work focusing on wide shots and rarely mixing it up. Oh, and this episode introduced the most on-the-nose character design I’ve ever seen, the “mad scientist” in charge of the Silhouette Knight Lab is the most obvious back-stab plot device I’ve seen in a while. If that turns out to be a bait and switch then I’ll happily admit so later on, but I doubt it. All in all, a pretty weak episode for Knight’s & Magic with the promise of action for next week.

Koi to Uso (Love and Lies) 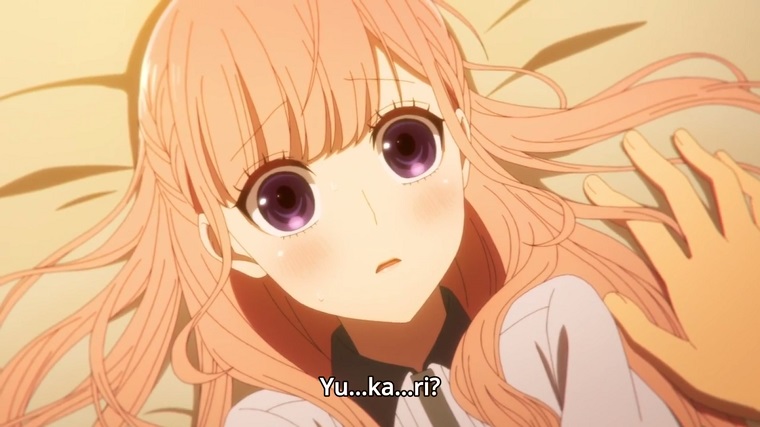 Clearly the government in this world is a lot more involved than our one, which definitely makes for good viewing. With the paired marriages matched at the age of 16, this whole episode felt a bit odd for me personally but the concept was there and if the cliffhanger is anything to go by, they’re definitely going to deliver. Most noticeably in this episode, there was a high emphasis on the inner monologue of Yukari which inherently contrasted with the visual reactions of Ririna. The “lies” as labelled in the title are becoming more apparent with every week. As you’d expect from a romantic drama, every week brings more complications to the otherwise simplistic narrative. For this show in particular, it’s been a very, very slow start so hopefully the story line will become more complex and engaging. With that being said, this episode hinted at the introduction of a side / main character that doesn’t even appear in the OP as far as I’m aware. This white haired silent type seems pretty generic but considering the show we’re talking about that’s nothing we haven’t already put up with. So next week the show will either deliver on progressing the relationship between Yukari and Ririna or it’ll do the more expected route of a fake-out before cutting to the day after. Hopefully Nisaka will become less irritating as well, that’d be nice. 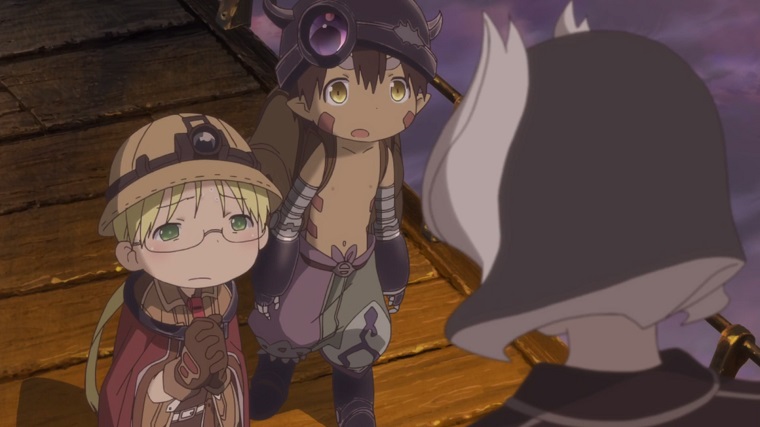 Despite the pacing of the show grinding to a halt and this episode not really providing much for the overall narrative, this week’s Made in Abyss was an entertaining watch. Visually, from a Film Studies point of view, this episode was fantastic with the cinematography working excellently to make our main characters look small, childish and powerless. Contrasting that to the overpowering, stone-faced character of Ozen “The Immovable”, this episode worked incredibly well in terms of character building and visual direction. However, from a macro point of view and assessing the episode on a value level would prove that this week sacrificed a lot of screen time for this effect. Somewhat of a theme this week, slowing down the pace and taking time to explore side-characters is a fine thing to do as long as the episode keeps the viewer engages throughout. Personally, this episode felt just below the high expectations Made in Abyss has built for itself. Although there were a couple of good animation sequences and the consistently beautiful art/backgrounds continue to astonish me, as a whole it all felt above average. For a show that viewers are calling the best show of the season (possibly the year), it’s small dips like this that concern me as a viewer but shouldn’t have too much of a lasting effect for the series. It certainly set up an interesting plot device for next week so I guess we’ll have to wait and see.

HIFUMI’S NEWFOUND RESPONSIBILITIES ARE PROVING DIFFICULT TO ADJUST TO 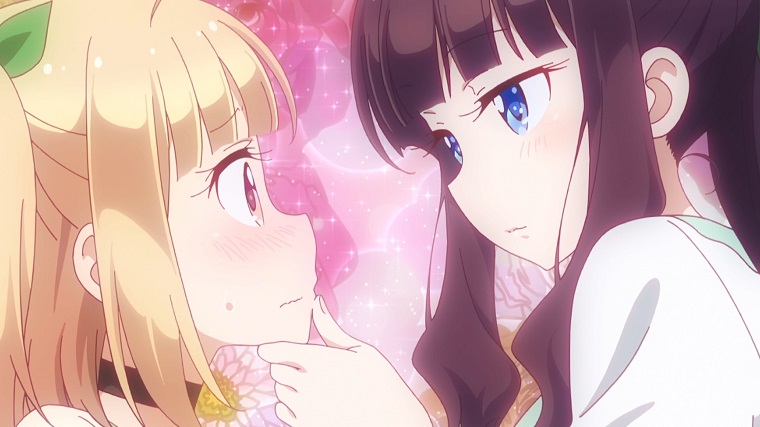 You must think me a broken record every time you come to the New Game!! section but it’s a testament to the pure consistency and high level that it achieves every single episode. Last week, I made a tweet joking about how many screenshots I took with that single episode of New Game!!, saying that I’ll restrain myself next week. Here we are, a week later and… I’ll never learn. This is always the most difficult show to pin down a single header image, purely because of the raw amount of content crammed into each and every episode – without fail. For this episode, the game they’re building is still in the conceptualization stage so the creative minds and imaginations of the team are integral to the state of the workplace. Where other slice of life shows may falter cinematically with such dialogue heavy scenarios, this episode used a lot of imagination frames where we’re given a window into the mind of each character. Especially with Aoba, trying to constantly come up with fresh character designs and often venting her frustration with her team. Then even in-universe, this episode also treated viewers to a lengthy and fleshed out flashback sequence of Aoba, Nenecchi and this newly introduced friend Hotaru. Splicing in the occasional Hifumi moment to show her progression as a newly appointed Character Team Leader and this episode truly was a sight to behold. Usually I’d complain when an episode is deemed too good for my criticism but I’m enjoying it so much that I don’t even care. Can’t wait for next week’s dosage of my favourite show.

Welcome to the Ballroom

WITH AN OFFICIAL DECELERATION OF BATTLE, THE INTENSITY GROWS BY THE MINUTE 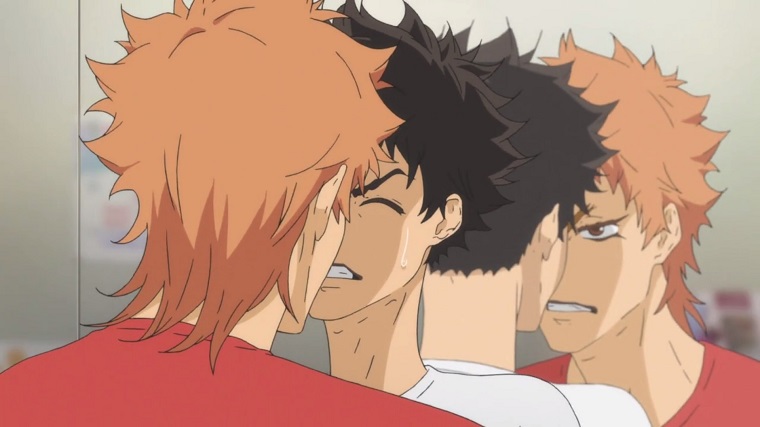 First and foremost, I was correct in saying Mako-chan is best girl as I have officially declared her best girl of the year. Despite coming off what I considered to be the most impressive episode of anime I’ve seen in a long time, this week somehow didn’t disappoint. Honestly, I’m shocked at how incredible Welcome to the Ballroom is and its refusal to dip for even a second. For the sake of nitpicking, I will say that this episode continued to present a series of still images to mimic movement as opposed to actual animated sequences. While that’s great for someone like me who spends most of his time editing and putting together animated GIFs, it’s a shame given the inherent nature of ballroom dancing. However, to say that this show’s sense of spectacle was lost as a result with this episode would be far from the truth. Once again moving away from the practise hall and into a variety of settings, this episode also followed the trend of slowing down the pace.

Where this episode differed was its focus on introspective monologues through, not only our protagonist of Tatara, but in Mako and Gaju. As with every sports anime, the thrill is in the activity itself but the satisfaction is in the characters taking part and how their outcome resonates with the viewer. Even Gaju who’s being made out to be an asshole has an ounce of decency in him and these characters are far from two-dimensional. Another incredible episode keeping this show at the top of the list in terms of the season’s personal enjoyment and critical evaluation – fantastic.